Bédard: Saxophone Sonata No.3 for Alto sax and organ Bédard: Saxophone Sonata No.3 for Alto sax and organ

Denis Bédard, who was born in Quebec City in 1950, first studied music at the Conservatoire de musique de Québec, graduating with first class honours in organ, harpsichord, chamber music, counterpoint and fugue. He continued his studies in Paris and Montreal, as well as in Amsterdam with Gustav Leonhardt, and was laureate of the "Prix d'Europe" in 1975 and of the CBC Radio Talent Competition in 1978. A professor at the Conservatoire de musique de Québec from 1981 until 1989 and organ professor at the University of British Columbia in Vancouver from 2001 until 2004, Denis Bédard was organist at St-Coeur-de-Marie church in Quebec City for 19 years and then became organist at St-Roch church, also in Quebec City, in September 1997.

Since September 2001 Denis Bédard has been organist and music director at Holy Rosary Cathedral in Vancouver. As a concert artist he has given recitals across Canada, in the United States, in France and in Brazil. In 2020 the Royal Canadian College of Organists awarded him the Diploma of Fellowship (honoris causa).

Denis Bédard's compositions include more than 35 chamber music works as well as orchestral and vocal music and many organ works. He has received commissions from Radio-Canada, the CBC, the Québec Symphony Orchestra, the Royal Canadian College of Organists and various professional musicians in Canada, England, France,

Switzerland and the U.S.

His music, essentially tonal and melodic, is characterized by a concern for

formal clarity and immediate communication with as vast a public as possible. 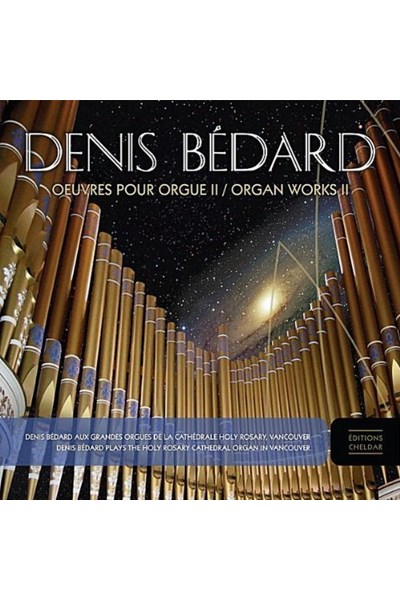